FOR MORE info, music and news, CLICK on the 3 horizontal lines in the upper right hand corner! 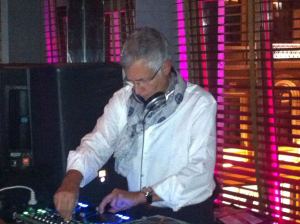 While there he catches the attention of club and concert impresario HOWARD STEIN, famous for owning disco-era STUDIO 54’s only rival, XENON, New Wave club, ROCK LOUNGE, and earlier, one of America’s biggest concert producers, presenting
THE ROLLING STONES
JANIS JOPLIN
PINK FLOYD
THE WHO
LED ZEPPLIN
THE DOORS
and BETTE MIDLER among many others.

Howard wants to open a posh, intimate supper club on the Upper East Side of Manhattan. He wants the music to be special and he invites Mark to be the Musical Director.

Mark is given carte blanche with the music and once again he creates an eclectic mix of lounge and dance music that draws from numerous sources and influences.

The club, AU BAR, on East 58th St. between Park Ave. and Madison Ave. quickly becomes the epicenter for the international set that makes Manhattan its play ground.

Mark mixes the AU BAR CD, subtitled “LIVE AT AU BAR ….INTERNATIONAL MUSIC FROM NEW YORK’S LEGENDARY NIGHTCLUB” which was released by Atoll Music in France and was distributed by MSI Music (the distributor of the HOTEL COSTES compilations) in the United States.

He regularly features chill, lounge and dance mixes by some of Europe’s top djs, including an an hour each week from STEPHANE POMPAGNAC, the DJ and compiler of the HOTEL COSTES, Paris compilations.

He is featured at the TRIBAL SESSIONS (with Chus & Ceballos, Ron Carrol, Ivano Bellini, and Ricky Montanari) at WMC. Also plays at BASE and The Red Room at The Skybar at THE SHORE CLUB in Miami Beach.

At ADE, In Amsterdam, he plays at the “Twisted Disco” party with Monte La Rue at NL
Also the Therapy Sessions with Dutch DJ Bart Thimbles and Jason Bentley (Bossanova, Los Angeles) including live sets by Praful, and Adani & Wolf, at Hotel Arena.

At the WINTER MUSIC CONFERENCE/ M3 SUMMIT, Mark is featured at The MEDITERRANEAN VIBES party with top Spanish and Ibiza DJ/producers DANNY MARQUEZ and DAVID PENN.

He launchs the acclaimed compilation series LE GROOVE ECLECTIQUE, subtitled “A Chilled Out Voyage Through Global Dance Music.” With LE GROOVE I & II

“DREAMSVILLE,” Mark’s original composition from Rendezvous Lounge, is heard on radio stations across the U.S. with a total listening audience of almost 30 million people. The song was in the top 30 playlist of CD 101.9 FM, New York, for over 10 months, reaching a top chart position of ..5.

Mark is an A&R/producer/artist with the BEVERLY HILLS- based label, RENDEZVOUS ENTERTAINMENT, headed by saxophonist DAVE KOZ.

Signs the album ONE DAY DEEP by the incredibly talented Amsterdam-based PRAFUL. whose 1st single, “SIGH”, is ..1 on RADIO & RECORDS’ American Smooth Jazz Radio airplay chart and stays in the top 5 for over 8 months.

A&Rs remixes of “SIGH” done by Amsterdam’s top dj/remixer/producers. Signed 2nd Praful album, “Pyramid In Your Backyard,” released in May 2005. 1st single, has charted on radio as well.

Mark also compiles and mixes the RENDEZVOUS LOUNGE series, highlighting the best new and established chill/lounge/downtempo/electronic artists with an emphasis on artists that perform live.

Mark is the guest on JAZZTRAX, the longest running nationally syndicated Smooth Jazz show on American commercial radio. The 5 hour show featured the music of RENDEZVOUS LOUNGE.
JAZZTRAX picked “Ocean Beach” by Black Mighty Orchestra from RENDEZVOUS LOUNGE as the ..1 Song of the Year for 2004.
And RENDEZVOUS LOUNGE was picked as the top compilation album.
First DJ to be a featured when he plays the Lake Tahoe Jazztrax Summer Jazz Festival, summer 2004.

Mark is music programming consultant for the 2 hour syndicated commercial radio show, “CHILL WITH CHRIS BOTTI.” The show features downtempo/chill/lounge artists and is the first commercially syndicated show of its kind in the U.S.

BOTTI is a best selling Columbia/Sony contemporary jazz artist with five of his own albums.

Mark plays the launch party for the show in the Chill Suite of the BEVERLY HILLS HILTON at the RADIO & RECORDS convention in Los Angeles.

He is musical curator for chill and downtempo music for Satellite Records.com, based in New York.

*In the summer of 2012, he is featured in the 3 day Soul Meeting festival on the beach in the south of France.

*In November, 2012, he goes on tour in Turkey, playing the W, Istanbul and the House Cafe, Ankara.

*In March, 2013, He starts to host and produce “Manhattan Groove,” a 3 hour Saturday night show on a new station, Jazz Radio Istanbul (www.jazzradio.co.tr)

*In Aug. 2013 he co-produces a live jazz concert for Jazz Radio Istanbul, featuring French guitarist Marc Antoine with his All Star Band and Italian saxophonist Aaron Tesser and New Jazz Affair on the coast of Turkey.

*He has a summer 2014 residency playing the Praia Grande Sunset Sessions, on the beach in Ferragudo, Portugal

From Portugal, Mark then moved back to the United States and settled in the Miami Beach area, where he is now Resident DJ at Solé On The Ocean Resort and Spa.  soleontheocean.com